Thus to reject the Lord Jesus Christ as one's own personal Saviour results in a continued state of willful ignorance as evidenced in a person's indifference or opposition to such supernatural realities as the Genesis (Noahic) flood, Biblical miracles, Christ's resurrection, the existence of angels, the reality of Satan, etc. (compare 2 Pet. 3:3-7).

The foolish speculations of Scholasticism which occurred in the period of history known as the Middle Ages did not shed any light on the subject of angels. Strong, the Biblical scholar and theologian, states that these religious philosophers debated such questions as "how many angels could stand at once on the point of a needle (the relation of angels to space) or whether an angel could be in two places at the same time" and other such questions. Ignorant superstition preached from the cathedrals "exalted Satan to the rank of a rival god—a god more feared than the true and living God. Satan was pictured as having horns and hoofs—an image of the sensual and bestial."  [Systematic Theology, by A. H. Strong, one volume edition, pages 443-444].

In regard to the subject of angels, the following will help the humbled heart which is yielded to the living and true God:

1) Jesus Christ, God the Son, testified as to the existence and reality of angels (Matthew 18:10; Mark 13:32, etc.). Every believing heart recognizes Christ's authority in all matters, and no one knows more about angels than He does! The Lord said it; I believe it; that settles it! (Actually what Christ has said settles it whether I believe it or not!)

2) God's Word, which is absolute truth (John 17:17), contains much teaching on the subject of angels. There are 108 references to angels in the Old Testament and 165 in the New Testament.  God has much to say about these created beings.

3) The Gnostics recognized the existence of angels but wrongly sought to worship them (Col. 2:18). Gnosticism had its roots in Greek philosophy and wrongly taught that matter is evil and the body is evil, and thus they denied that Christ ever dwelt on earth in human form (see 1 John 4:3).  Paul dealt with the Gnostic errors in Colossians and John dealt with them in 1 John.

4) The past and present occurrences of demon possession and demon worship attests to angels (1 Cor. 10:20-21). Compare the false religion of our own American Indians, demon activity in Haiti, and similar demonic inspired idolatry in different parts of the world.  The spirit world is very real.

6) God's revelation, not man's reason is the key. The key is what God says about angels, not what man thinks about angels.

7) In the time of Jesus there were a group of people who denied the supernatural and denied the existence of angels.  These were the Sadducees (see Acts 23:8).  So also today there are people who deny the same.  God's truth stands whether people believe it or not (Isaiah 40:8).


The Creation of Angels

4)  Angels were created in holiness but later some fell into sin.  God did not create any wicked angels or any sinful angels.  All the angels were perfect in all their ways until sin was found in them (compare Ezekiel 28:15 which describes what Satan was like before his fall). Many of the angels sinned and became wicked by an act of their own will. We will study this in detail in our study of Satan. Fallen angels are called "demons" or "unclean spirits" or "Satan's angels."

The Nature of Angels

1)  Angels are normally invisible but they can become visible and appear in various forms.

It should be noted that a person needs the right conditions to see and observe another sphere or realm. For example, an atom cannot be detected or revealed by the five human senses. Neither can light be seen at particular wavelengths or frequencies in the electromagnetic spectrum, i.e., ultraviolet, gamma rays, x-rays, infrared, etc.  Angels cannot be normally seen or detected.  We cannot see radio or TV signals, but this does not mean they are not there.

[Note:  The Hebrew and Greek word for "angel" simple means "messenger."  There are times when this word is used of non-angelic creatures.  For example, a number of times in the Old Testament we read about "the angel of the Lord."  These are references to the Lord Jesus Christ who sometimes appeared in bodily form prior to His incarnation. Another example is in Mark 1:2 where the word "angel" (translated as "messenger") refers to John the Baptist.]

There are three things that every PERSON possesses. These are what make a person a person!   The following triangle may help you to remember the three components that make up a PERSON:

Do you decide, think and feel? ______ Do you qualify as a true person? _____ Does God have these three elements of personality? To answer this, please place the following verses of Scripture where they belong on the triangle:

Angels also possess the three components of personality.  They have intellect, will and emotions.

Keep in mind that we are showing that angels are persons.  This does not mean that angels are humans.  God is a Person, but He is not a man (Numbers 23:19).  Angels qualify as persons, but they are not members of the human race.  Don't confuse humanity with personality.

Angels have intellect as seen in the fact that they are learning.  As God deals with the church today, angels are learning of God's manifold wisdom (Eph. 3:10).

2) Angels possess a will: the ability to decide and choose.

3) Angels possess emotions.  They have feelings.

Angels Were Involved in Key Events of the Life of Christ

The angels were fascinated by the incarnate life of the Lord Jesus Christ (1 Timothy 3:16).  The very One who created them (Col. 1:16) became a man!

Oh what wonder, what amazement, who can count the priceless cost,
When my God left heaven's glory for the manger and the cross.

How the angels watched in wonder, as on me His grace He shed.
Choosing rather than His glory, such a lowly manger bed.

Oh what worship He is worthy, Oh what praise my heart should sing,
To my Lord, to my Redeemer, to my Saviour and my King!

Angels Are Involved in the Life of the Church,
the Body of Christ

Angels are learning of God's wisdom by means of the church (Eph. 3:10).

The practices of the church are to be carried out with the knowledge that good angels are present and are witnesses of what we do (1 Timothy 5:21).

The angels witness our participation in the outworking of Christ's LIFE in the arena of the world of death and darkness (1 Corinthians 4:9).

Angels will be judged by the church (1 Corinthians 6:3— "Know ye not that we shall judge angels?").


Angels Were Involved in Other Great Events in History

Angels were witnesses of creation:  "Where wast thou when I laid the foundations of the earth?....When the morning stars sang together, and all the sons of God shouted for joy?" (Job 38:4-7).   "Morning stars" and "sons of God" are expressions that both refer to angels.

A fallen angel (Satan) was involved in the fall of man (Genesis chapter 3).

Angels were involved in keeping sinful man away from the tree of life (Genesis 3:24).

Angels were involved in the destruction of Sodom (Genesis chapters 18-19).

Angels will be involved in the judgments of the great tribulation, in proclaiming the gospel during the great tribulation (Rev. 14:6-7), and in the second coming of Christ.  Most of the book of Revelation pertains to the time of tribulation climaxing with the return of Christ to the earth, and angels are mentioned repeatedly throughout this book.

Angels are mighty but they are not almighty.  Only God is almighty.

Their power comes from God.  They were created with the abilities that they have.

There are many things they cannot do.  They cannot create things out of nothing. Only God has the power to create.

They cannot do anything unless it is permitted by God.

The first two chapters of Job illustrate two things:  1)  Angelic beings have great power, even to the point of killing humans and causing bodily afflictions (boils);  2) Angelic beings can only do what God allows.  They must always submit to God's sovereign rule.

One angel terrified the Roman soldiers guarding the tomb of Christ (Matt. 28:2-4).

The entire band of soldiers who tried to arrest Jesus would have been no match for the angelic forces (see Matthew 26:53).

Angels Are Not Limited By Time and Space


Angels are above and independent of the laws of matter, time, and space.  In Acts 12:7 an angel had no problem appearing suddenly in a securely locked prison room, and on the way out the iron gate posed no problem (verse 10).

In Daniel 9:20-21, it took Gabriel about three minutes (the time it took for Daniel to utter his prayer in 9:3-20) to travel from heaven to earth, in response to Daniel's prayer.

The third heaven is located somewhere beyond the second heaven.

The vastness of the stellar universe is hard to comprehend.

The nearest star, our sun, is 93 million miles away. The sun is an average sized star.  Our sun's diameter is 860,000 miles. The sun, if it were hollow, could contain over a million earths inside its surface. The next closest star, Alpha Centauri, is about 4.2 light years away.  [A light year is the distance that light travels in one year, nearly six trillion miles.  Light travels 186,000 miles in one second.  Light can reach the moon in less than two seconds. Light from the sun, 93 million miles away, takes about eight and one-third minutes to reach the earth.]

To help visualize this, if the sun were the size of the dot above the letter "i", the nearest star would be a dot ten miles away, and other stars would be microscopic to "dime-size" dots hundreds and thousands of miles away.

Our Galaxy (The "Milky Way"), and all the other galaxies are located in God's second heaven. 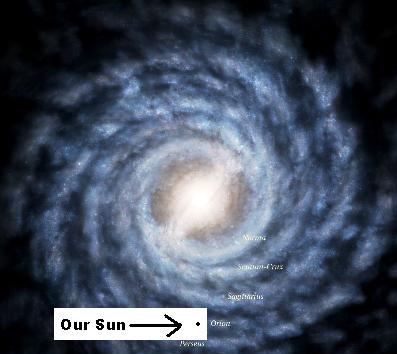 So, for angels to travel from the earth to the third heaven (which is beyond our universe) involves a kind of travel that mankind knows nothing of.

Angels Should Never Be Worshiped

Only God the Creator should be worshiped.  Angels, even though they have much wisdom and power, are mere creatures, and they should not be worshipped.

The Lord Jesus Christ did allow men to worship Him, which is a strong argument for His deity.  Only the Creator-God should be worshiped.  Jehovah's Witnesses teach that Christ was a created being, a creature, an exalted angel.  If this were the case, then Christ should have refused worship.  But the opposite was the case as the following outline shows: